Cubertou was originally a working farm which supported wheat, grapes, cattle, pigs and no doubt some chickens. There are yokes on the site that would have been used to harness the oxen drawing a hand held plough. When tractors were introduced into the area their weight impacted the land and it ceased to be appropriate for growing crops.

For many years neighbouring farmer would bring his cattle to graze at Cubertou. 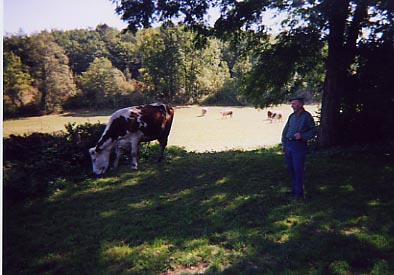 Now the meadows are cut for hay; but before being cut they produce an abundance of wild flowers in the spring and early summer.

The woods are also full of wild life; boar, deer, mushrooms and orchids are all a natural part of Cubertou.

In the 1960s Cubertou was bought by English artist Peter Norton and his ballerina wife Olive Deacon. The Nortons were both admired and successful in their chosen fields; as artists, teachers and mentors. Peter studied at the Slade School of Art and exhibited in galleries around the world. He taught at Guildford School of Art until being dismissed, along with 40 other staff members, for sympathising with student demands. Olive was a soloist with the Russian Ballet and principal with Sadler’s Wells.

For 25 yrs Peter and Olive ran the Cubertou Arts Centre. This would be populated by numerous students of all ages, many sleeping in tents in the meadows under the inimitable Cubertou starlit skies. Sometimes as many as 50 would be studying and eating together in the large open barn. Peter gave a sensitive and learned daily “crit” of the work of painters and etchers in the barn, while Olive masterminded not only the kitchen but also full-length productions created and performed in the courtyard – ballets with all comers being welcomed (not just dancers!) But these were actually well crafted affairs, with rehearsals, costumes and much imagination.

In 1996 John and Claire Norton became the owners of Cubertou, they encouraged Music and Arts courses as well as letting out the property to writers, families and even a wedding. John and Claire made numerous enhancements to the buildings, not least new roofs (which are pretty enormous), while retaining the rustic charm of the place.

(There is a delightful booklet, published by the Norton family, that gives more insight into some of this history, please contact us for details)

In December 2011 Liz and David Cutts were delighted to become the proud owners of Cubertou. They ran and hosted summer courses with Cubertou SARL until 2018. Brexit happened. In 2020 they became French residents and in 2022 created the Association Cubertou Arts et Musique and are happily hosting and running just a few summer courses each year.